On the occasion of the International Youth Day, the Palestinian Central Bureau of Statistics (PCBS) issues a press release demonstrating the situation of youth in the Palestinian society 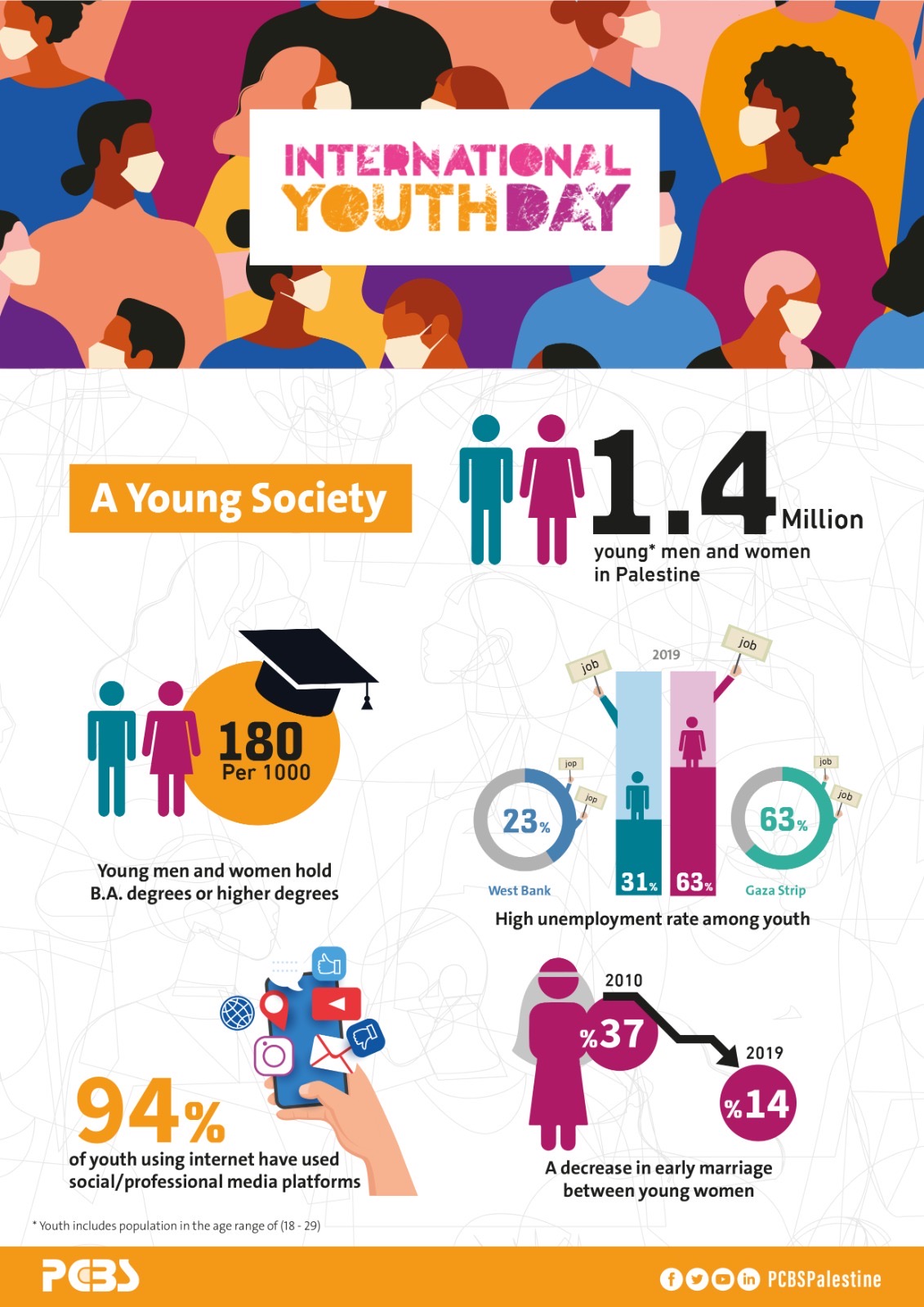 In its resolution 54/120, the United Nations General Assembly designated August 12th of each year to be the International Youth Day, being key partners in the change, which serves as an annual celebration of the role of young women and men as essential partners in change, and an opportunity to raise awareness of challenges and problems facing the world’s youth.

The COVID-19 pandemic has global, major and negative implications on many sectors including social and economic aspects. In Palestine, the impact of the pandemic is doubled due to the difficult restrictions imposed by the Israeli occupation, which exacerbated the suffering of the Palestinian community.

The  youth are the society's most live, vital and productive segment, and they are expected to have an important and major role in the recovery from this crisis. To that end, the UN announced that this year's anniversary is intended to highlight the participation of the youth and motivate them to work and engage in the local, regional and global movements under the theme “Youth Engagement for Global Action”, in addition to concluding morals and lessons learned in order to promote their presentation and participation in the official institutionalized policies more often.

Adecrase in the Percentage of Early Marriage

The percentage of young women (18-29 years) who got married before reaching the age of 18 decreased to about 14 young females per 100 females, according to the preliminary results of the Palestinian Multiple Indicator Cluster Survey (MICS), 2019 (12% in the West Bank and about 17% in the Gaza Strip), as opposed to 37 females per 100 females according to the Palestinian Household Survey, 2010.

Data indicated that the percentage of violence prevalence among currently or previously married young women reached 37%  in Palestine (31% in the West Bank and 46% in Gaza Strip) in 2019, Where during the COVID- 19 pandemic and quarantine all international studies expected an increase of violence against women during the pandemic in addition increase in domestic violence.

Disappearance of illiteracy in Palestine, including the youth

High unemployment rate among the youth

The current impacts of the COVID – 19 crisis since the beginning of March 2020 directly affected the different segments of the Palestinian society, especially the youth. These implications of the Coronavirus pandemic led to an increase in the unemployment rate among the youth that is generally high in normal situations. Thus, the unemployment rate among the youth (18-29 years) in Palestine reached 38% in 2019 (31% among males and 63% among females) as 63% in Gaza Strip and 23% in the West Bank. Data also showed that the higher unemployment percentage among the youth was for holders of intermediate diploma and higher, where this percentage reached 52% during 2019 (35% males and 68% females).

About 124 thousand young people work in the informal sector

One third of wage- employed youth work in the private sector have a monthly wage which is less than the minimum wage (1,450 shekels)

Half of the youth (18- 29 years) are not in employment, education or training

The data of the household survey for information and communications technology for the year 2019 showed that the percentage of the youth (18–29 years) who used the internet from any location reached 86% in Palestine (90% in the West Bank and 79% in Gaza Strip).  According to sex there are no differences.