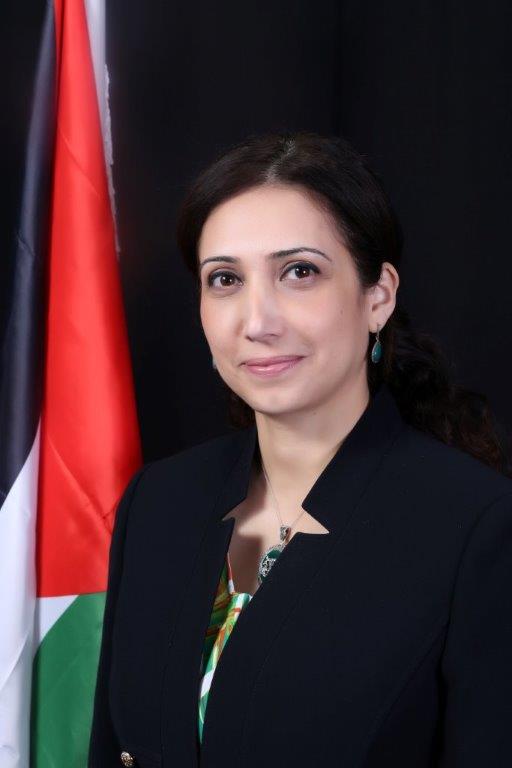 H.E. Ms. Ola Awad, President of the Palestinian Central Bureau of Statistics "PCBS" / National Director of the Census, announced on Wednesday  29/11/2017, the launching  of the third phase of the Population, Housing and Establishments Census 2017 in the State of Palestine, which represents the  actual count of the population which will go on during 01 -  24/12/2017, under the slogan "Hand in hand to build our homeland"

Ms. Awad, added that the count stage is the main stage of the census project, and it starts upon the completion of the implementation of the preparatory stages (Listing, enumeration  and delineation stages), where the census crews start visiting all Palestinian families to gather statistical data on family members, their demographic characteristics, social, economic and living conditions. This will be done using tablet devices for the first time.  Ms. Awad appealed to all families to cooperate with the census crews through duly filling out the questionnaire that was previously delivered to them and handing it out to the census crew member.

The President of PCBS / National Director of Census mentioned that the census 2017 includes all of those who are available and present in the State of Palestine on the night of 01/12/2017 , regardless of the type of document they hold, this will include other nationalities in Palestine, whether they are here on a visit or as residents, the census will also include: family members who are abroad temporarily for a period of less than one year for work reasons and they visit their homeland periodically, it will also include people on business travel, tourists or people performing Umrah, people abroad seeking medical treatment, students studying abroad regardless of the period of absence.

Ms. Awad explained, that the census will provide a valuable and comprehensive database on Palestinians in all areas: demographics, social, economic and other indicators that will reflect the Palestinian reality and measure the changes that have taken place over the past ten years; this will allow the creation of a cornerstone for proper planning based on accurate and reliable statistical data, it will also contribute to guide the policies of vital sectors including health and education services, economic and infrastructure projects, which motivates Palestine's development in various fields.


Ms. Awad added that the census 2017, is the third Palestinian census to be conducted by Palestinian hands and by an independent Palestinian decision, in addition to the fact that it will be implemented for the first time by the using "Tablets". It is worth mentioning that the census is the largest statistical operation to be implemented in order to provide the necessary data for planning purposes of economic and social development where the census data will be used for development planning purposes. Such data will provide statistical data on the demographical characteristics such as fertility, mortality, migration, labor force, unemployment, occupational distribution and economic activity, as well as data on educational characteristics and on the number of economic establishments distributed by regions and economic activity.
The President of PCBS / National Director of Census, confirmed that the statistical data collected from the field is purely collected for statistical purposes, and that the publication of its findings will be in form of statistical tables where PCBS is committed to maintain the confidentiality of individual data according to the General Statistics Law 2000. Moreover, PCBS confirms that all the census staff carry a signed identity card with a photo containing the name of PCBS, the name of the employee, his/her identity number, job title and place of work. Thus, we ask our people to verify the identity of the employee before declaring any information noting that the data will be collected through "Tablets".
Ms. Awad indicated that two major stages of the census have been successfully completed. The first stage was, the delineation, conducted during the period from 15/07/2017 to 07/08/2017, by placing red signs on the walls of buildings, this process is the main step in the implementation of the census. The success of the census requires all of us to assume responsibility and cooperate in preserving those figures and signs, and the removal or tampering of those signs is a breach of law and a loss of great efforts made years ago. The second phase consisted of counting and listing the buildings, residential units and facilities by filling out the census questionnaire of  buildings, housing units and establishments during the period from 16/09/2017 to 31/10/2017 by drawing numbers using a blue wax pen on the entrances of the buildings and residential units and a red wax pen on the entrances of the establishments.
On this occasion, President of PCBS / National Director of Census, expressed her sincere gratitude and appreciation to His Excellency President Mahmoud Abbas, H.E. Dr. Rami Hamdallah, Prime Minister, the Palestinian government, the Governors, all ministries, Public and Private Institutions, Civil Society Institutions, Universities, Municipalities, Local Authorities, Chambers of Commerce & Industry, Schools, the Palestinian Central Elections Commission, the Public and Private media, journalists and all Palestinian families and citizens for their continuous support to the national census team.