Palestinian Central Bureau of Statistics (PCBS) took the responsibility to implement a household survey to measure the impact of COVID-19 pandemic (Coronavirus) on the Palestinian households socio-economic conditions, the sample size reached 9,926 households and the time reference for data during the lockdown period from March 5th and up to May 25th, 2020. As well as providing necessary data needed to fulfill/meet the needs of decision and policy makers from the government and both the private and public sectors, in addition to civil society and international institutions in a manner that contributes to developing programs and interventions that can limit the impacts and consequences of this current pandemic.

54% of workers in the West Bank were absent from work during the lockdown period. The declaration of emergency and the closure of all private and public institutions as a result of the restrictions imposed by the government to face the Coronavirus pandemic, in addition to home quarantine according to the declared emergency state is considered a main reason for absenteeism with a percentage reached 75%.

The effects of lockdown measures impacted the ability to work differently by economic activity in the West Bank, with the industry sector being more affected than any other sector. Accordingly, 51% of main income earners who stopped working were active in the industry sector. Also, workers in the agricultural sector were affected by the lockdown, where 7% of those main income earners who stopped working during the lockdown period were working in the agriculture sector.

Less Working Hours than the Usual

COVID-19 has markedly impacted income streams (wages and salaries). Only 23% of main income earners received their wages as usual, while 25% of them received their wages/salaries partially and 52% of them did not receive any wages/salaries at all during the lockdown period (95% of them work in the private sector, 2% work in the government sector, and 3% work in other sectors).  However, the impact of COVID-19 on wages/salaries is very different in West Bank compared with Gaza Strip, as 61% of the main wage earners in the West Bank worked for no wages compared to 31% of them in Gaza Strip did not receive their usual wages. Similarly, there are gender variations, where 26% of the female main income earners did not receive their full wages, which is less than their male counterparts, representing 52%.

4% of households in need of health services were unable to access health services. where the results indicated that the lowest percentages of access were reported for immunization and care of chronic and unchronic conditions.

As for reasons for the inability to accessing healthcare services, the most important reason was that the healthcare centers and hospitals did not receive patients (39%), inability to pay (cover costs) (23%), fear of leaving the house (11%).

51% of households in Palestine with childern between the ages (6-18 years) and are enrolled in education before the lockdown period, whose childern particpated in eductional activities during the lockdown; (53% in the West Bank and 49% in Gaza Strip). Also, there is a clear variartion between the different governorates in terms of students participation, the highest participation was in Jerusalem Governorate (85%), and the lowest was in Hebron Governorate (39%).

Percentage of Households in Palestine whose Children Participated in Any Educational Activities during the Lockdown Period (March - May, 2020) by Governorate 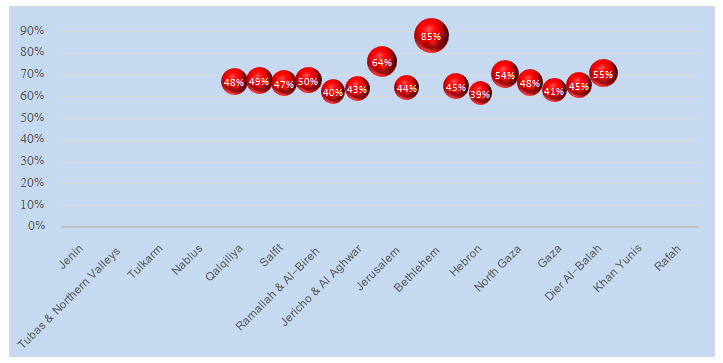 58% of Palestinian households usually borrow money or buy on credit to cover household's consumption items, including food. Not surprisingly, this percentage has risen up during the lockdown, reaching 63%. It was highest in Gaza Strip compared to the West Bank (79% in Gaza Strip and 52% in the West Bank).

The monthly expenditures on food supplies declined for 41% of the households during the lockdown compared with February 2020 (42% in the West Bank and 40% in Gaza Strip).

During the lockdown period, there was a key role for the government and for social solidarity inside the Palestinian community in facing the social and economic challenges resulting from the pandemic, where the data showed that as a result of imposing the lockdown, 15% of households that received assistance in form of food vouchers and food supplies were not benefiting from any assistance and social protection programs before the lockdown,   followed by government cash transfers with (5%), and family/friends transfers from inside of Palestine (Domestic) with (4%).

5. Citizens Priorities to Limit the Impact of COVID-19

29% of the households responded that the cash transfer programs are the most desirable measures and procedures the government should be taken in such times of crisis. While job opportunity and employment program came as the second priority at a percentage of 21%. Whereas the third priority expressed by the respondents of the phone survey was food vouchers, food supplies parcels and procurement coupons (19%); taking into consideration that there is a variation between the West Bank and Gaza Strip as shown below. 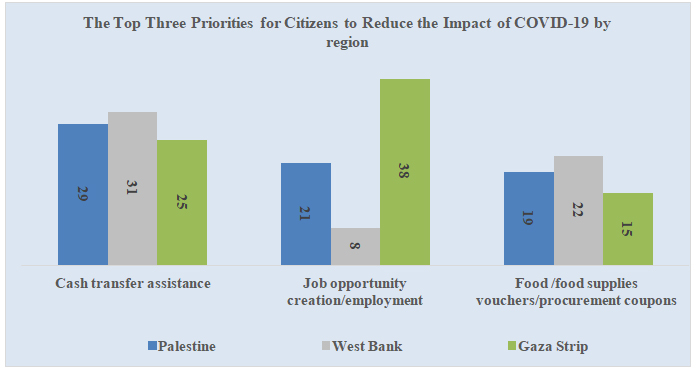